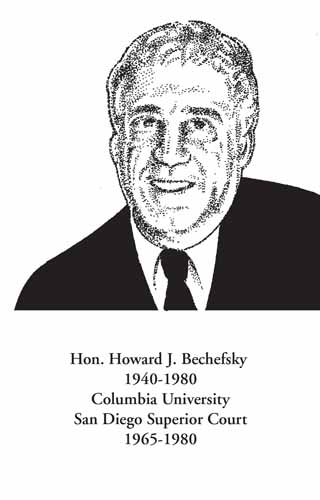 After high school Judge Bechefsky was offered two engineering scholarships but chose instead to go on to Columbia University where he earned his bachelor's degree in 1962, and his law degree in 1965. Without the scholarship to sustain him, judge Bechefsky worked various jobs including selling hot dogs and working as a soda "jerk."

After law school he served as a Deputy Attorney General in Los Angeles before joining Sheela, Lightner, Hughes, Castro & Walsh in San Diego.

A memorable family moment occurred when Judge Bechefsky,s father came from Brooklyn for the swearing-in ceremony. Having never gotten past the fourth grade, Mr. Bechefsky was extremely proud of his son.

Judge Bechefsky was known for his charisma, generosity, sense of humor, commitment to family, and love of sports. He was an avid runner and also enjoyed swimming. When his sister joined him at a Children's Hospital meeting, he introduced himself as "Howie Bechefsky, Claire's little brother."

He was survived by his wife, Rachel, daughter, Helen; son, Michael; and sister, Claire.