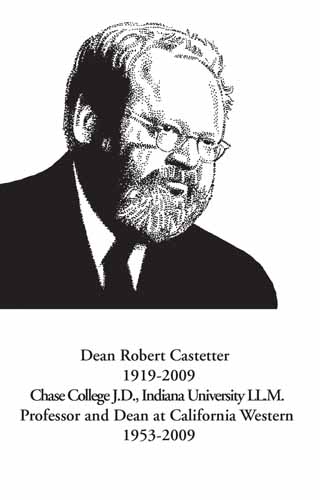 “Dean Castetter was one of the leading and most well respected figures in higher education in Southern California, first at San Diego State College and then at California Western School of Law. He was revered for the personal interest he displayed in each student and the optimistic attitude he brought to every situation, best expressed in his motto “Every day is a good day, but some days are even better than others.”

Dean Castetter’s interest in teaching began while in the Army during World War II. As a Second Lieutenant, he was a weapon’s instructor, training new recruits. He realized he was talented at conveying knowledge to others and that he enjoyed the teaching experience. He eventually was promoted to the head of the entire educational facility. This experience laid the foundation for his career in higher education.

While in business, Dean Castetter was drawn into the legal and academic world. He obtained his Juris Doctor degree from Chase College of Law in 1947. He got his Masters in Law degree, L.L.M., from Indiana University in 1953. He received an honorary Doctor of Law degree from Washington and Jefferson in 1971. The President of San Diego State College recruited him to join the Business School as a professor in 1954, where he ultimately became Chair of the Finance Department. Alumni voted him most popular professor at San Diego State.

In 1959, he was again recruited by the President of a University, this time, California Western, to take over its floundering law school. It was not accredited, either by the State of California or the American Bar Association (ABA). All but 11 students had left, and it was down to one faculty member. Despite all this, Dean Castetter took the job. Within two years, he had hired a distinguished full-time faculty, brought in many new students, paid off the school’s debts and obtained full accreditation by the ABA and California (a record time for a law school to receive accreditation). In 1973, the university was having severe financial problems and the law school was in jeopardy of losing its accreditation.

Dean Castetter formed a Board of Directors and moved the law school away from the university to become a stand-alone institution which led to success as an independent law school. Dean Castetter retired in 1985. He remained Dean Emeritus of the school for the rest of his life. By the time of his death in 2009, the school had grown to more than 900 students and 43 full-time faculty members, with alumni in 49 states and 35 foreign countries.

Dean Castetter was known throughout his career for having a personal interest in all of his students. He knew the name and year of graduation of every student who attended the law school during his time there. Today, there are scores of lawyers, business people and community leaders who are quick to profess that Dean Castetter was a major catalyst to their future success.