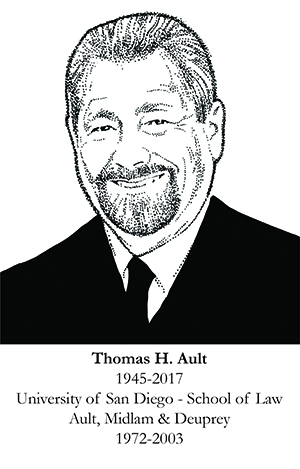 Thomas (aka Tom) H. Ault was born in San Diego on September 22, 1945. He attended Crawford High, graduated from San Diego State, where he was a member of the Sigma Chi Fraternity, and graduated in 1972 from the University of San Diego School of Law. Tom worked as a clerk for the Honorable Edward J. Schwartz, Chief Judge of the United States District Court, San Diego.

Tom had a love and respect for the legal profession. Perhaps he was born with that. His maternal grandfather, Harry Sweet, was an attorney in San Diego. His father, Richard Ault was a Judge of the Superior Court and a Justice on the Court of Appeals and is also a Distinguished Lawyer Memorial Inductee.

Tom his wife Susie were married for 49 years. He was a friend to many and a mentor to countless attorneys.