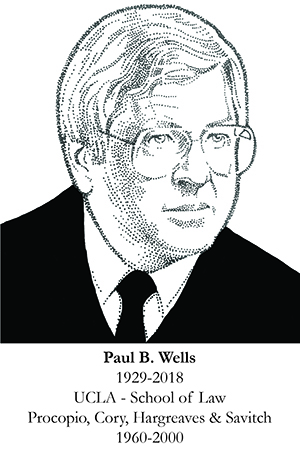 Paul B. Wells was a respected member of the San Diego Bar and a “Go To” lawyer for more than 40 years. He came to San Diego via Texas A&M and UCLA Law School and was awarded the “Order of the Coif”.  After a stint in the Navy, Paul began practicing law at Higgs, Fletcher & Mack.  He moved his young family to Connecticut and went to work in Texaco's Office of General Counsel in New York.  In February of 1964 he took a trip to San Diego and after enjoying a warm and sunny experience decided to move out west.

Upon arriving in San Diego, Paul began practicing at the firm which later became Procopio, Cory, Hargreaves, and Savitch. He became a pillar at Procopio where he helped create the culture still there today. He was particularly supportive of young lawyers sharing there was a balance between practice and personal lives. He was the firm’s senior litigation attorney until he retired in 1994.

Throughout his career he was known as a lawyer with honesty and integrity where his word was his bond. He was a vigorous advocate of the importance of the San Diego Bar Association.  Paul was a member of San Diego’s volunteer community for 30 years as an airport host, Grossmont Hospital greeter, reader at KPBS, and reading to the kindergarten class at Avocado Elementary. He adored children especially his grandchildren.

Paul was devoted to his family, his friends, the city he loved, and those less fortunate. His love of life, his gentle nature and deep laugh, became his calling card. He loved the holiday season and was known for his holiday attire and for Christmas parties he and Carol had for many years