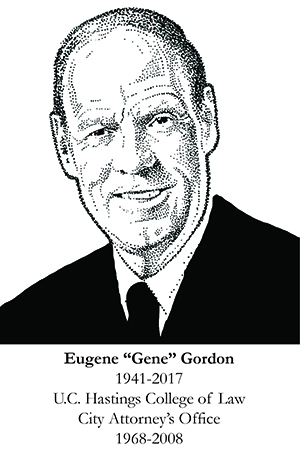 Eugene “Gene” Gordon received his B.A. degree from the University of California, Riverside and his J.D. from Hastings College of the Law in San Francisco. Gene was admitted to the California State Bar in 1969.

After passing the state bar, he was hired by then City Attorney John Witt. Gene handled at least 1,000 cases while with the Office of the City Attorney.  In addition to trying numerous cases, he also argued before the Fourth District Court of Appeal and the Ninth Circuit Court of Appeals, and was admitted to the United States Supreme Court.

Gene taught extensively at the San Diego Regional Public Safety Training Institute at Miramar College in San Diego on the subjects of civil and criminal liability of law enforcement officers. He lectured on municipal tort liability at National Institute of Municipal Law Officers (NIMLO) and was a regular instructor for the League of California Cities (LOCC) on civil rights, use of force, and K9 related cases. Gene also provided legal updates to LOCC and at numerous Public Risk Management Association (PRIMA) and Public Agency Risk Managers Association (PARMA) conferences. His expertise was respected throughout California and the nation.

Gene retired from the City Attorney’s Office in 2008, but continued to report to work as a volunteer almost daily, up until two weeks prior to his passing. He was considered such an invaluable team player, that the Office of the City Attorney provided him with an office where he could continue to mentor all those who would seek his advice.

In addition to his legal acumen, Gene was a gifted athlete who played high school and collegiate baseball. He brought those skills to the office, where he played shortstop for the City Attorney’s softball team, aptly named “The Dangerous Conditions.”