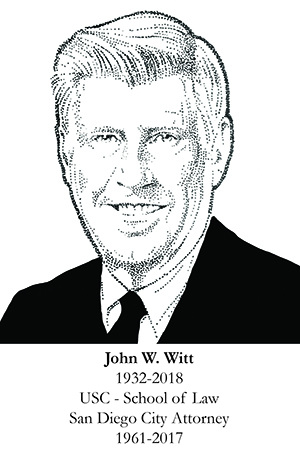 John Witt graduated from the University of Southern California School of Law in 1960, and joined the San Diego City Attorney’s office in 1961, serving as a prosecutor, civil trial lawyer, and public utility specialist.  Appointed City Attorney by the City Council in 1969, he was elected to the post six times by San Diego’s voters, retiring in December 1996.  As San Diego City Attorney, he advised the Mayor, City Council, and City Manager on all official legal matters and supervised a staff of more than 100 lawyers.  John was especially proud of his role as leader of an office of dedicated public servants, mentor to countless lawyers and judges in San Diego and beyond, and in negotiating the stadium lease that kept the Padres in San Diego in the 1970s. After his retirement from public office, John joined the law firm of Lounsbery Ferguson Altona & Peak.

John lectured on civil rights law for the Georgetown University Law Center and authored articles in numerous legal publications.  He was a past president of the International Municipal Lawyers Association and the City Attorneys Department of the League of California Cities.  In addition, John was a past chair of the American Bar Association’s Section of State & Local Government Law, a founding member of the ABA’s Government & Public Sector Lawyers Division, and a past member of the ABA House of Delegates.  In 1996, he received the ABA’s Clair Nelson Award for Outstanding Service by a Public Sector Lawyer.

John was also a dedicated husband, father, and grandfather.