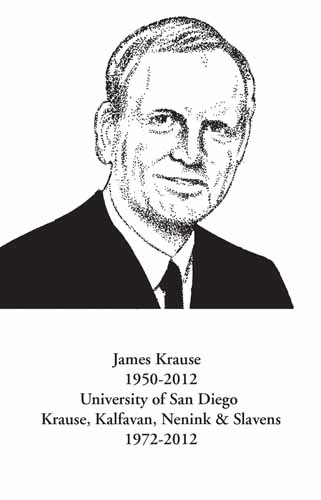 James Krause was Senior Partner at Krause Kalfayan Nenink and Slavens, LLP where he served as the firm’s mentor and leader. He began his career as a clerk for the Hon. James M. Carter, U.S. Court of Appeals for the Ninth Circuit, before joining the law firm of Sullivan, Jones and Archer. He went on to form Reninche & Krause in 1981 before opening a solo practice in 1991. He also served as an adjunct professor at the University of San Diego School of Law, teaching securities law.

Mr. Krause was an expert in securities litigation and a lawyer who gave back to the community of which he was apart. He was a trustee of the University of San Diego and the Mission Valley YMCA and was deeply involved with the First United Methodist Church of San Diego.

Mr. Krause leaves behind tangible evidence of his commitment. The Krause Family Skate/Bike Park in Clairemont was built in 2002 and the three-story Krause United Methodist Center in Mission Valley houses class rooms, a counseling center, development office, contemporary worship center and a coffeehouse. His legacy extends to the underwriting of a room in the new sciences building at Bishop’s School and helping to lead the largest endowment effort in the history of San Diego School of Law.