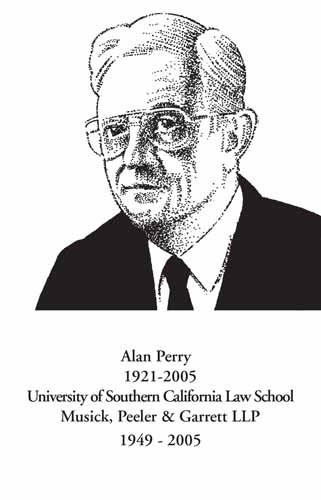 Alan R. Perry attended San Diego State College, Pomona College, and the University of Southern California Law School. At USC, he was assistant editor of the law review and was elected to Order of the Coif and Phi Beta Kappa. He received his LLB in 1949 and practiced law in San Diego for 56 years.

Mr. Perry’s public service contributions included: director, assistant secretary and general counsel of the YMCA of San Diego County from 1980 to 2005; member and international general counsel of Lambda Alpha International, an international honorary land economics society; President of the Board of Trustees of the San Diego County Public Law Library's Law Library Justice Foundation from 1995 to 1998; adjunct professor of law at California Western School of Law from 1967 to 1983; and member and chairperson of the La Mesa Planning Commission from 1960 to 1970.