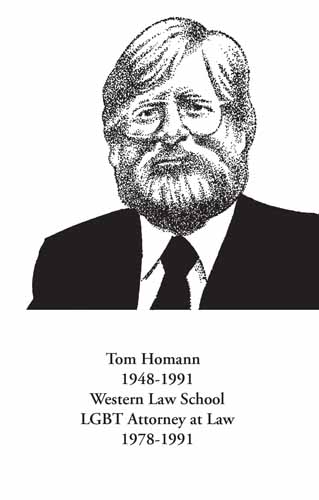 Thomas (Tom) F. Homann was an accomplished and pioneering gay lawyer in San Diego. His great passion in life was the Constitution. After passing the California Bar in 1978, Tom joined with one of the few other openly gay lawyers in San Diego, George Haverstick, who had a thriving practice representing an unusual mixture of clients including unconventional religious groups, transsexuals, and people involved in the sex industry. Near the end of his life, Tom noted that, “while our clients were not especially popular, their legal issues…involved very fundamental and important…constitutional rights.”

During Tom’s career, he fought several constitutional mêlées, including, fighting the City of San Diego to prevent it from shutting down the F Street adult bookstores or limiting the materials they sold; fighting efforts to license and restrict the operations of topless bars; suing the San Diego County Sheriff when he refused to hire gay and lesbian deputies; and representing two sailors with A.I.D.S. who the Navy wanted to discharge without medical benefits because of their sexual orientation.

Tom’s list of legal battles and accomplishments is lengthy and varied. The hallmark of Tom’s efforts was to empower those who were shunned by society and to prevent the government from silencing marginalized voices. In 1990, Tom received the Ceil Podoloff Award from the ACLU in recognition of his civil liberties efforts surrounding the First Amendment, police misconduct and gay and lesbian rights.

Although his life was cut short by A.I.D.S. in 1991 at the age of 42, Tom Homann’s contribution to the legal and humanitarian landscape in San Diego continues. Tom’s memory flourishes through the Tom Homann Law Association, which is dedicated to the advancement of gay, lesbian, bisexual and transgender issues throughout California and the nation.