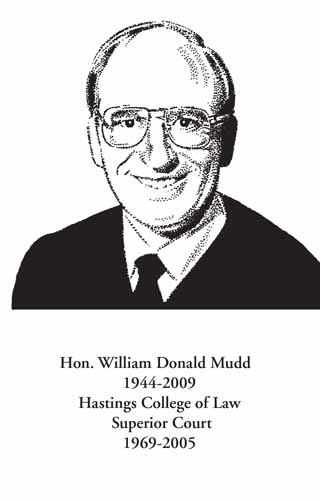 In 1970, he was a deputy city attorney, later joining Malowney and Malowney and then Sickels, Chialtas and Mudd in 1972. In 1984, was appointed a court commissioner and then served as a Municipal Court Judge after being elected, assuming office in 1985. In 1988, Governor George Deukmejian appointed him to the Superior Court. He presided over 600 – 700 cases including some of the most high profile criminal cases in San Diego history, demonstrating a judicious demeanor, temperament, and fairness to all parties and the public. He retired in 2005.

Judge Mudd was past president of the San Diego Judges Association, a Point Loma Optimist for 38-years and served as a board member and officer for the Kiwanis Club and Foundation of Tierrasanta and the Serra High School Foundation. He was a Boy Scout Eagle and Troop Board of Review member, and soccer and little league coach. He was a life-long leader and advocate for American Disabled Veterans Association and at the time of his death president of Disabled America Veterans Industries in San Diego.

Judge Mudd was an avid golfer. Above all else, he loved his family and is survived by his wife, Pat; daughter, Darci; son, Brandon; and daughter-in-law, Rena.