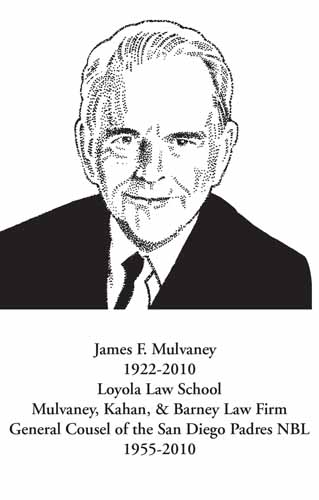 James “Jim” Mulvaney immersed himself into civic activities after moving to San Diego in 1945 where he began his career at National Steel and Shipbuilding before going on to become president of Pacific Coast League’s San Diego Padres and then as vice president and general counsel of the San Diego Padres National League Team.

Whether he was leading the board of directors at St. Vincent de Paul or United Way, or he was raising money for the Old Globe Theatre, Mr. Mulvaney was dedicated to doing all he could for San Diego. His leadership and service benefitted dozens of groups including the San Diego Chamber of Commerce, the Juvenile Justice Commission and the Mingei International Museum.

A longtime United Way leader, Mr. Mulvaney was chairman of the local, state, western region and international United Way of San Diego. He was honored as the first recipient of an award named in recognition of his contributions to the community. The James F. Mulvaney Community Leadership Award honors a local leader who has demonstrated long-lasting, exceptional service to San Diego.

Mr. Mulvaney played a prominent role in major league baseball coming to San Diego in 1969, and was an important figure in San Diego baseball history.

He was a former president of LEAD San Diego, and was recognized by the group for lifetime achievement. In addition to being named “Mr. San Diego” in 1991, Mr. Mulvaney’s distinctions include the San Diego County Bar Association Outstanding Service Award in 1988.

As a naval officer during World War II, he commanded the destroyer escort USS Kyne. He also served during the Korean War for the U.S. Navy Judge Advocate General’s Corps and was a commander in the U.S. Navy Reserve.

Mr. Mulvaney earned his law degree from Loyola in 1948 and became a member of the California bar in 1955. He taught classes at the University of San Diego School of Law and in 1969, he was co-founder of Mulvaney, Kahan & Barney law firm.