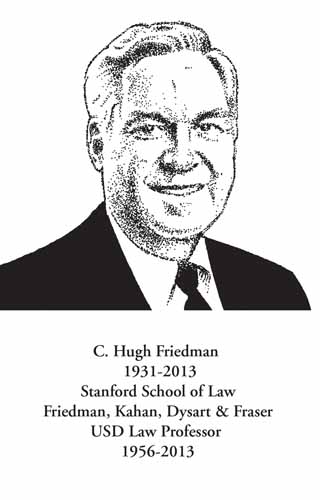 Professionally, aside from teaching, Mr. Friedman began his career as a deputy attorney general for the state of California from 1956 to 1958. From there, he served as corporate counsel for Westgate-California Corp. from 1958 to 1971 and then as senior partner at Friedman, Kahan, Dysart & Fraser from 1971 to 1977.

Mr. Friedman was part of the group that handled negotiations with Major League Baseball for the San Diego Padres expansion team in the late 1960s. He also served as a board member for the team through the John Moores ownership period.

A graduate of Yale University and Stanford Law School, Mr. Friedman grew up in the San Francisco Bay area and was a talented clarinet and saxophone player, having played gigs with Benny Goodman and Artie Shaw.