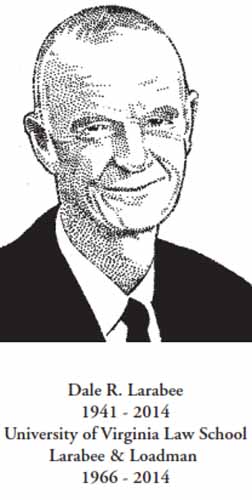 Dale Larabee loved being a lawyer. He was a proud member of the San Diego Trial Lawyers Association and served on the Board of Directors. He received several “Outstanding Trial Lawyer” awards during his career. He also served as the Employment column editor for the Trial Bar News for many years.

When the local and state organizations changed their names to the “Consumer Attorneys,” Dale continued to refer to himself as a San Diego Trial Lawyer because that’s what he was. He loved to represent the underdog and thrived being in front of a jury. Many of his clients became lifelong friends.

Dale helped hundreds of San Diegans recover justice in wage theft, discrimination and whistle blower cases. He left his mark on the case law that guides employment lawyers today. Because of Dale’s work in Snider v. Superior Court (Quantum Productions, Inc.), decided by the court of appeal, Plaintiff’s employment lawyers can speak with non-officer employees of the defendant. In White v. Ultramar, Dale established the right to sue for wrongful termination in violation of public policy, where the claimed policy is not set forth in a specific statutory scheme.

Dale practiced with partner David Loadman the majority of his career. When Loadman retired, he worked for a time with Josh Gruenberg and then with his son Joel Larabee and Hans Gienapp.

Dale was also a lifelong athlete, running 62 marathons (with a personal best time of 2:29), seven Ironman triathlons and a multitude of other crazy endurance tests, such as the Cystic Fibrosis Stair climb, the baking-hot 75-mile Tecate-Ensenada Relay Race and the frigid Escape from Alcatraz swim and triathlon. His free time and vacations were spent biking through San Diego and the rest of the world.

He is survived by his loving wife of 47 years, Diane Larabee, and his sons, Joel and Jeff Larabee.