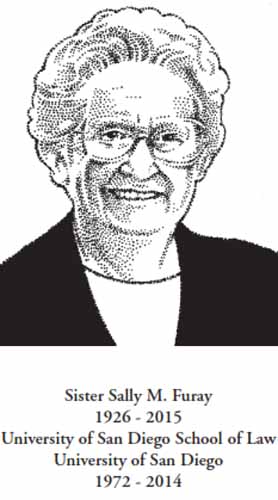 Sister Furay entered the Society of the Sacred Heart in 1944. She earned her doctorate in English and American Literature from Stanford University in 1955.

Known for her tireless work in the area of higher education, Sister Furay served at the University of San Diego from 1954 to 1996. She served as Academic Vice President and Provost for 25 years. She also taught courses in English and in law, held administrative roles as Dean of Arts and Sciences and department chair. Beginning in 1968, while Dean, she attended the University of San Diego School of Law in the evenings, earning her J.D. degree in 1972.

An ardent activist for equal rights, especially for women, she helped to implement into the law school curriculum courses in sex-based discrimination, including a course titled “Sexual Harassment and the Law,” which she taught from 1974 to 1992. Sister Furay retired from the University of San Diego in 1996 but that did not end her involvement with education and the legal community. She participated on many boards and committees of regional, national and international organizations. She was the first woman president of the Western College Association, Vice President of the San Diego County Bar Association, Chair of Senator Barbara Boxer’s Judicial Appointments Advisory Committee for the Southern District of California, Board Chair of the National Association of Catholic Colleges and Universities, President of the Board of Directors of the Old Globe Theatre, and President of the Board of Governors of the San Diego Foundation. Beginning in 2002, she also consulted extensively in helping to re-establish the University of St. Thomas School of Law, in Minneapolis. In addition, she assisted in the creation of the Neighborhood National Bank, which provides banking services to San Diego’s under-served and economically challenged communities; she was serving as director and secretary of the bank at the time of her death.

She served on numerous other boards, most especially the Legal Services Review Panel for the National Association of Independent Colleges and Universities, the California Student Aid Commission and the Sacramento-based EdFund, a national student loan agency.

Teacher, administrator, and lawyer – Sister Furay harmonized all these roles in the service of her calling. As the citation for the Theodore M. Hesburgh, CSC, Award from the Association of Catholic Colleges and Universities reads: “She is decisive without being judgmental, compassionate without being soft, gentle without lacking firmness. Her peers are impressed by her clear analytical legal mind and just as conscious of her ability to synthesize and harmonize.”