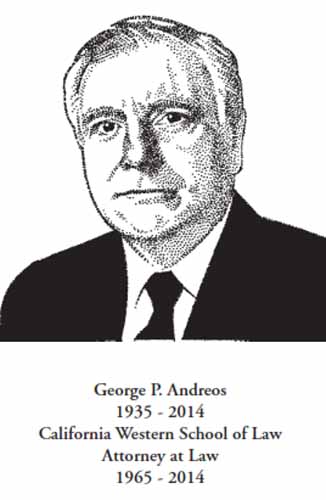 George P. Andreos was born January 20, 1935 in Chicago, Illinois. He received an undergraduate degree from the University of Illinois; served in the U.S. Marine Corps for three years obtaining the rank of Captain. He obtained his juris doctorate in 1965 from California Western School of Law. Thereafter, he held the Presidency position with the California Western Law School Alumni Association.

He was a frequent speaker at seminars sponsored by many associations and organizations.

George loved playing 4-wall handball with his friends on a weekly basis. He participated in many tournaments including the Marine Corps Annual Tournament in San Diego. He enjoyed outdoor activities such as attending to his produce groves, sporting events, snow skiing, camping and hiking. At the age of 72, he climbed Mt. Whitney reaching the summit of 14,500 feet.

George is survived by his wife, Beverly of 48 years, four children, three in-laws, and seven grandchildren.