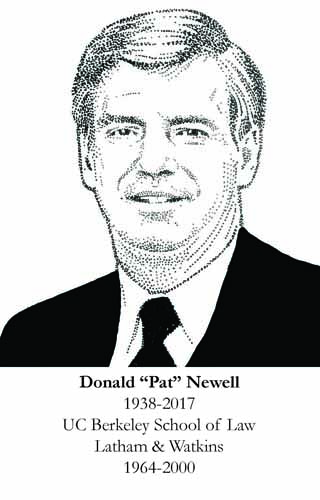 Pat Newell began his legal career at Latham & Watkins in September 1964 after graduating from Boalt Hall, UC Berkeley, and he remained with the firm until his retirement in 2000. Pat’s many contributions to Latham and the legal community over nearly four decades cannot be overstated. His bright mind, unrelenting energy, positive attitude, and generous spirit left an enduring mark on all who knew Pat and were fortunate enough to work with him.

Pat had many career accomplishments and was one of the leading California corporate lawyers of his generation, as well as a respected mentor and active participant in the business community. Pat’s practice centered on insurance and general corporate matters, representing clients in complex financings, mergers and acquisitions, and corporate governance matters. As clients and other lawyers often remarked, Pat was remarkably gifted lawyer, promoting his clients’ interests (primarily on transactional and regulatory matters) while also maintaining good humor and relations with opposing parties and counsel.

Pat also was a selfless and spirited leader, and he was an instrumental member of the core leadership group that transformed Latham from a mid-sized Los Angeles law firm in the 1960s to the global firm it is today. In the 36 years Pat was with Latham, the firm grew from 29 lawyers to over 1,100 lawyers. Pat moved from Los Angeles to San Diego in the mid-1980s and became San Diego’s Office Managing Partner not long afterward. During Pat’s tenure as Office Managing Partner in San Diego, the Latham office experienced explosive growth, growing from approximately 25 lawyers in 1986 to over 80 lawyers in 2000. With Latham now at the forefront of the legal sector (in 2017 Latham became the first law firm to top $3 billion in global revenues in a single year), every area of the firm’s success has its roots in the soil Pat helped to cultivate.

In addition to his leadership at Latham & Watkins, Pat was active in the legal community, with roles including Articles Editor for the California Law Review and Chairman of the Business Law Section of the State Bar. Pat provided strong support and encouragement to other local attorneys as a member of various local legal organizations including, but not limited to, the Association of Business Trial Lawyers and Inns of Court. And Pat was an avid supporter of pro bono legal work; Pat’s support led to significant involvement in pro bono matters by Latham attorneys, and to numerous pro bono awards for the firm.

After retiring from Latham & Watkins in 2000, Pat served as Senior Vice President and General Counsel for SCPIE Holdings. He also served on the Board of Directors for Mercury General Insurance, SCPIE Holdings, and Jacmar.

Pat was beloved by his family, friends and colleagues. He grew up in Los Angeles and attended UC Berkeley, where he majored in Business Administration. Pat was a collegiate letterman in both boxing and football while at Cal. One of Pat’s proudest achievements was serving as Co-Captain and starting offensive tackle for Cal’s 1959 football team, a year in which the Golden Bears won the Pacific Coast Conference Championship and played in the Rose Bowl in Pasadena. Pat graduated summa cum laude in 1960 with numerous honors, including being named a National Football Foundation Scholar Athlete. Upon graduation, Pat went on to serve his country and spent two years in the US Army.

Pat and his wife Susan lived in Rancho Santa Fe, CA for more than 25 years and were dedicated members of the Catholic Church in Rancho Santa Fe. After Pat’s full retirement, Pat and Susan moved to Pinehurst, North Carolina. Pat loved the game of golf and spent many hours on the course with his friends and family. Upon his passing in 2017, Pat was survived by his wife Susan, and four children – Mike, Katie, Allison and John – their spouses, and his eight adoring grandchildren.

Pat’s true legacy lies in the culture of teamwork and professionalism he fostered. His flexible and forward-looking approach reflected his commitment to supporting the growth and development of others. For all his talents, Pat was modest and unassuming, incredibly approachable, a wonderful listener, and a friend to everyone with whom he worked. And no one can forget his booming, contagious laugh! His leadership inspired a great work ethic and a commitment to legal excellence, but also a persistent spirit of loyalty, support and irrepressible good humor. Pat was a true gentleman whose optimism and kind spirit touched all he came in to contact with, both personally and professionally.