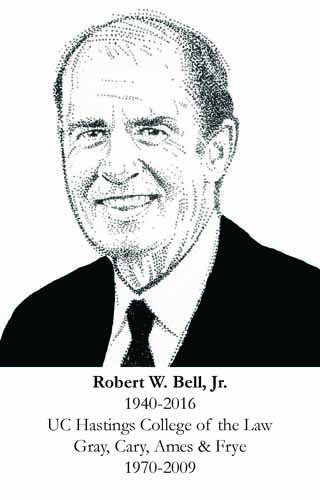 Bob became the go-to expert who trained, explained and helped shape state law in wrongful termination cases. He was considered a pioneer in California trials involving Title VII, the 1964 civil rights act prohibiting discrimination against employees on the basis of sex, race, color, national origin and religion. His briefs and advocacy promoted fair, nondiscriminatory practices by employers, as well as educating judges on this new law and, as a result, reaped praise from all sides-- labor, employee, management and judicial. Bob also served as a valued mentor to a generation of employment lawyers at Gray, Cary, who have honored him by continuing to stress fairness and civility in the representation of employers. A law colleague observed that if, as many believe, the civil rights act was the single most important U.S. law enacted in the 20th century, then Bob’s life's work as one of its principal advocates, trainers and experts can perhaps now be properly recognized and appreciated.

Throughout his long and distinguished career, Bob collected numerous honors and awards, along with San Diego Magazine's designation as a top labor attorney and coveted inclusion through peer selection in "The Best Lawyers in America" and "San Diego Super Lawyers" publications. He was described by a colleague as a superstar and fierce competitor but always a gentleman, gracious in victory and classy in the rare case of defeat. Despite his many outstanding accolades, accomplishments and the high regard of his colleagues in the legal arena, Bob was known for his humble and gentle manner, his kindness, modesty, the ever-present twinkle in his eyes and, above all, devotion to his family-- wife Lynn, and beloved daughters Annie Bell Reiter and Kate Bell as well as to his community. He served on the boards of The Gillispie School and La Jolla Country Day School and was dedicated to the Legal Aid Society of San Diego volunteering his expertise and legal services to low-income San Diegans. He joined the Legal Aid board in 1979 and remained on it for 37 years, serving as an officer and corporate labor counsel for many years.

Bob’s competitive spirit was developed before he became an attorney, when he attended the University of Colorado on a football scholarship and played in the 1962 Orange Bowl pitting Colorado against Louisiana State.