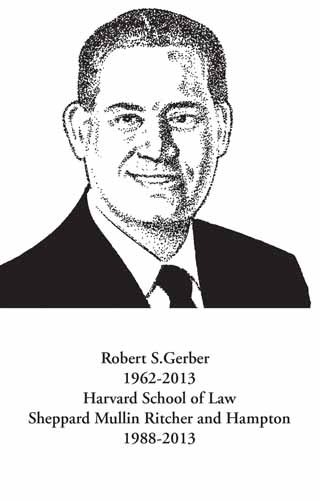 Robert Gerber was an equity partner at Sheppard Mullin Richter & Hampton LLP. He spent his entire career there following a clerkship with the Hon. Rudi M. Brewster.

He was a member of the Sheppard Mullin’s Intellectual Property practice group based in the firm’s Del Mar office. Mr. Gerber founded the firm’s Pro Bono committee in 2001 and served as its chair until 2010.

Among his professional involvements, Gerber was co-chair of the Trade Secrets subcommittee of the ABA Litigation section's Intellectual Property Litigation committee, chair of the Litigation section of the State Bar of California, vice president of the board of directors of the San Diego Bar Association, commissioner for the State Bar of California Commission on Judicial Nominees Evaluation, a president, vice-president, treasurer and master in the J. Clifford Wallace Inn of Courts, a master in the Louis M. Welsh Inn Of Courts, and a Ninth Circuit trustee of the American Inns of Court Foundation. He was also an advisor and former chair of the San Diego County Bar Association's Legal Ethics committee.

Mr. Gerber donated thousands of hours of free legal services to the indigent. He was incredibly selfless in his pro bono efforts where he led by example and inspired other attorneys to do great things in their communities. He was known for saying “practicing law will earn you a living, but doing pro bono will give you a reason to live.” In 2010 he was recognized as Sheppard Mullin’s Pro Bono Attorney of the decade. In honor of Mr. Gerber’s pro bono legacy, the firm has decided to re-name its annual pro bono award the “Bob Gerber Award.”