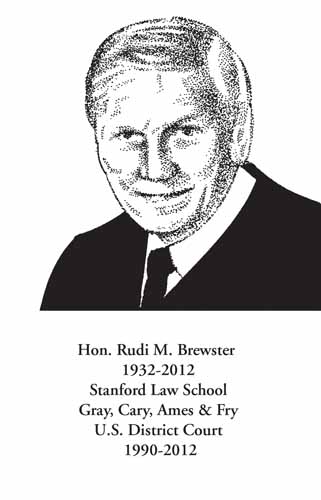 The Hon. Rudi M. Brewster was appointed to the federal bench by President Ronald Regan and sworn in on June 29 1984, to serve on the U.S. District Court for the Southern District of California. He assumed senior status on July 1, 1998.

Judge Brewster was a diligent professional known for being compassionate, caring, dedicated to his country, family, community and court.

Before going on the bench, Judge Brewster began his law career at Gray, Cary, Ames & Frye in 1960 where he became partner in 1968. He concentrated his practice on insurance defense work for aircraft manufacturers, including Boeing, Cessna Aircraft Co. and Beech Aircraft Corp.

Jude Brewster was a musician playing clarinet as a partner in Judicial Harmony with Judge Marilyn Huff who played piano. Their primary audience was at the Veterans’ Association where they would perform every other month.