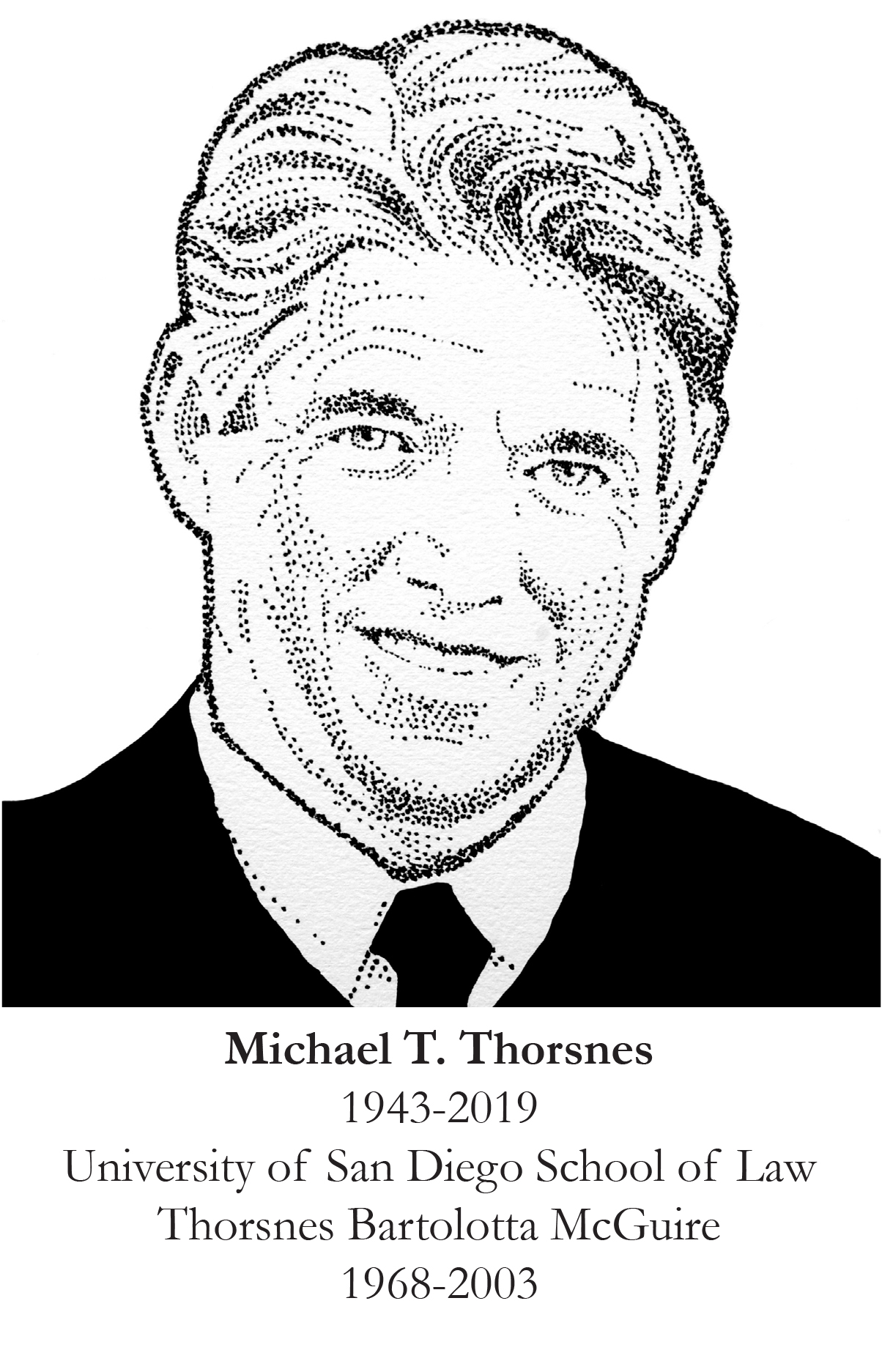 Michael T. Thorsnes retired from the active practice of law to pursue literary and related interests including serving as a National Finance Co-Chair and Poet Laureate for the Presidential Campaign of John Kerry. He continues to receive honors from his peers including in 2011 being named to the San Diego Bar Association’s “Legends of the Bar” list, and recognized as one of the “100 Most Influential Lawyers in California”, as determined by the Los Angeles and San Francisco Daily Journals. Continually since 1990 while practicing, he has been elected to “Best Lawyers in America” in Business Litigation by his peers (Woodward Press). He received the Daniel T. Broderick Award for Integrity, Professionalism and Ethics in 2000 (selected by four San Diego plaintiff and defense lawyer associations), The Arthur C. Hughes Career Achievement Award from the University of San Diego as well as the Outstanding Alumnus award from its law school, his alma mater.

While in law school he was a St. Thomas More Scholar, a member of the Law Review, was Student Bar Association President and formed and led an organization comprised of all the law students in California to gain the ability to appear in court as part of their training. A trial lawyer throughout his career, he twice received Outstanding Trial Lawyer awards from the San Diego Consumer Attorneys’ Association and was recently elected to its’ Past Presidents Trial Lawyer Hall of Fame. He serves as Vice-Chair of the Board of Trustees at the University of San Diego and has been asked to teach International Litigation at Magdalen College, Oxford during the summer of 2004. He has represented both plaintiffs and defendants in all types of cases, leading ultimately to a specialty in major business litigation, securing for plaintiffs in excess of $250 Million in verdicts, settlements and awards. He has defended some of California’s leading corporate entities.
In his last case, he successfully defended Pacific Bell (now AT&T), the state’s largest private employer, against a $2 billion dollar claim brought by the California Public Utilities Commission.

Thorsnes, active in the Democratic party since 1968, has worked at every level on numerous state and national campaigns and has served as an Advisor to the Democratic National Committee (DNC), A Trustee of the Democratic Leadership Council (DLC) and a member of the California Democratic State Central Committee. He has also been a member of the DNC Jefferson Trust, the DSCC Majority Trust, a member of Governor Davis’s Judicial Selection Committee in San Diego and accompanied Governor Davis during his official State visit to Mexico two years ago. Thorsnes took on the role of fundraiser with the Gore campaign and since then raised nearly $3 million dollars for Gore, Kerry, the party and Senate Democrats. He is active in Irish-American affairs, having chaired the American Ireland Fund Dinner in San Diego, and published an anthology of predominantly Irish poetry under the pseudonym of Rowdy O’Yeats’. An avid horseman, he was twice a member of the United States Cutting Horse Team and is a member of Rancheros Visitadores, an annual 750 rider trail ride, on which he is but one of two democrats, and known, of course, as Rowdy. In 2010, he made the list of “Irish Legal 100”, comprised of “the most accomplished and distinguished lawyers of Irish descent from all across America”. That same year, Mike received the Irish-American Bar Association of New York’s “Wild Goose Award”, in recognition of his “Talent, Creativity, and Uniqueness (unfettered by his legal education)”.